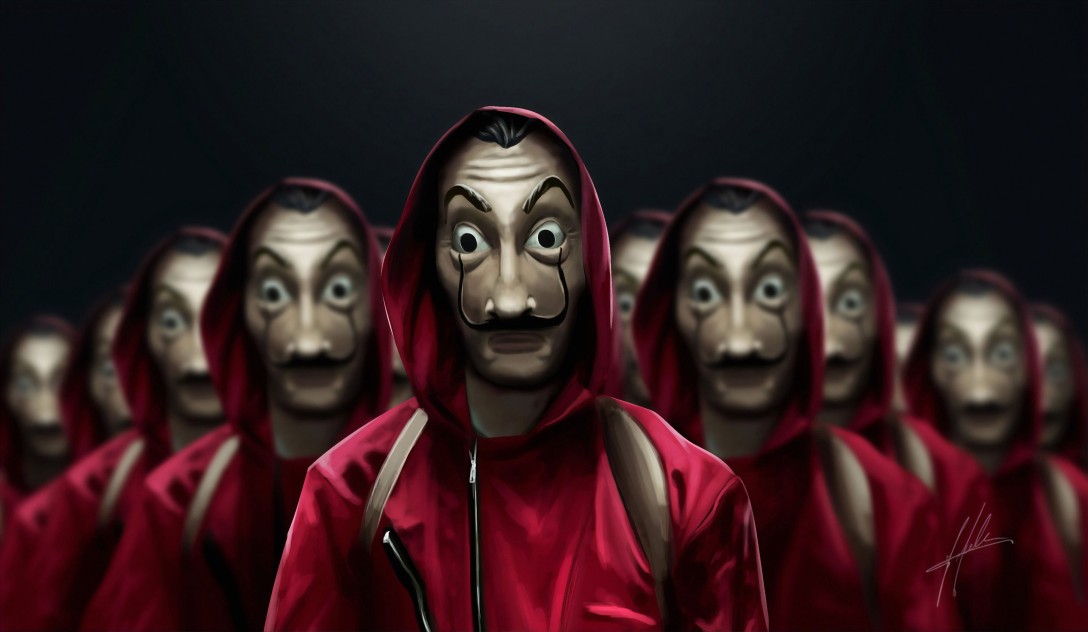 We started this series during the pandemic. Its trailer appears every time we turned on Netflix. Intrigued by the figures in red overalls and Dali masks, we decided to give it a go.

After the first season, I fell in love with the series – it has many intertwining layers of subtexts that make so much space for analysis. If you are looking for a series that is exciting, emotionally engaging and at the same time gives you fruit for thoughts. This is it.

I am talking about La Casa de Papel, in Germany it’s called Haus des Geldes and in English speaking countries, Money Heist. It is a very popular series on Netflix, ranking No.7 on their Top 10 list. I will start with a quick summary: La Casa de Papel is a heist-drama that focuses on the meticulous planning of the robbery of the Royal Mint of Spain. The master-mind and flag-bearer of the movement, called the Professor, recruits eight ex-convicts who have very little to lose, to execute “the most massive heist in history” and become rich overnight “without stealing from anyone”. We experience major parts of the a story through an unreliable narrator, one of the conspirators called Tokyo. As the plot unravels, it is obvious that although the Professor manages to predict most logical decisions of the police, the hostages, the media and the public, he fails to foresee the most versatile of human life – emotional reactions. Once overwhelmed by feelings such as fear, frustration, anger or even love, every actor in the series, including the Professor himself, commits blunders that are bound to derail the Masterplan.

Money Heist is one of the best series I have ever watched, a fine combination of thrill, emotions, Bildungsroman, crime and social critique. It makes you sit on the edge of the seat as the balance of power in the cat-and-mouse game between the police and the “criminals” constantly shifts. It makes you sympathise with and slowly admire the bandits/heros, who are, at the beginning of the series, seemingly social outcasts and good-for-nothings. But the most impressive part of the series, I think, is its interrogation of some age old problems. What is good and evil in face of injustice and oppression? What is the relationship between capitalism and the state?

La Casa de Papel stands out from the heist genre. First of all, the nature of the heist is very original. Instead of stealing something that already belongs to someone, Professor and his team hijacks the entire production line of banknotes (in the first season) This highlights to fact that money itself is a commodity, of which the means of production is monopolised by the state. By doing this, the Professor takes on a moral highroad. He attempts to redistribute wealth by seizing the means of production and creating more wealth. Of course, whether they manage to stay on this moral high road is another question. But it’s fair to say that La Casa de Papel starts with a just cause, and ends with heroic sacrifices.

Another reason why La Casa de Papel stands out from the genre is its character depth. La Casa de Papel depicts real-world struggles to survive. Orphans, drug addicts, ex-criminals, single-mothers, genius juveniles who hit the wrong path… The series tells stories of suffering, pain, difficult choices, moral dilemmas, all of which plague the lives of many people because the system fails them, as argued by the series. La Casa de Papel invests a lot of air time in showing glimpses of the characters’ past, which helps the audience understand their action and decisions. They are round characters, not just instruments to a crime or dramatic devices, but personalities that develop with the plot and open up engaging subplots – think about the affairs between Rio and Tokyo, Denver and Stockholm, and Stockholm’s transformation from a naive, scared mistress to a treasured member of the gang (which slightly mirrors the development of Carol in The Walking Dead).

After all, what’s more human than the fight for survival?

In the future posts I will look closer at some major problematics in the series, including (anti-)capitalism, the state and its power, class and social hierarchies etc.

Have you also watched Money Heist? If yes, what do you think about it?

View all posts by ABS